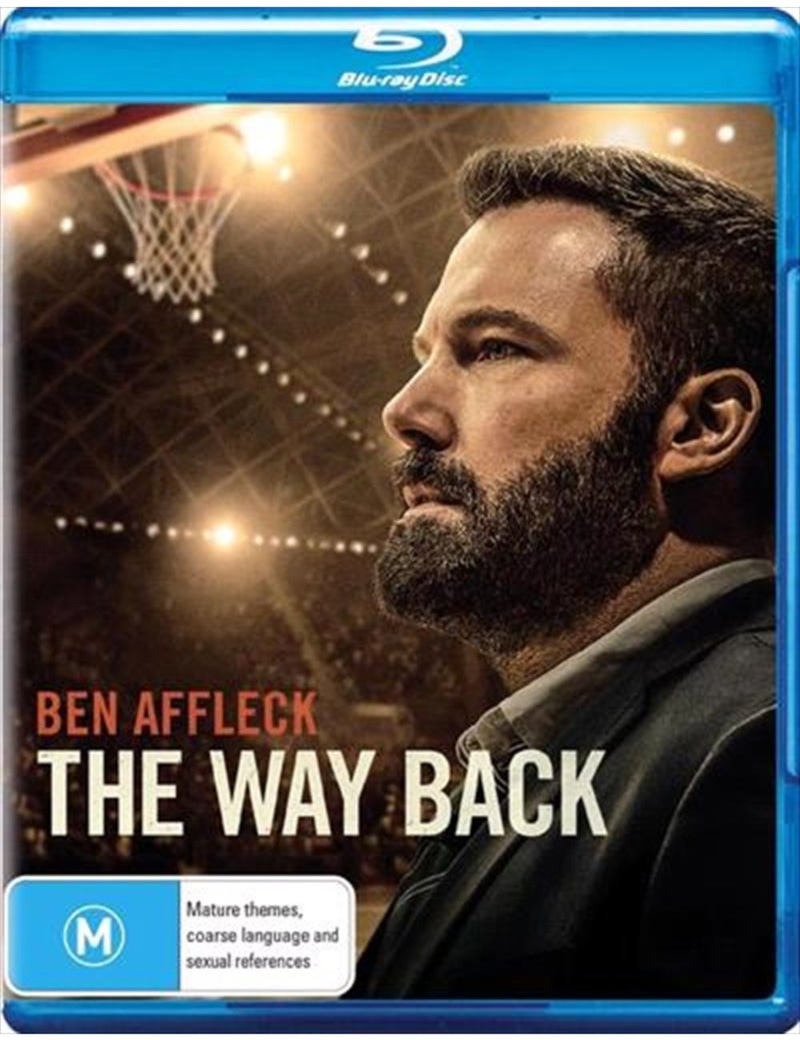 4 interest free payments of $4.75
No refunds for Change of Mind for this item provided by third-party sellers

Every loss is another fight.

Jack Cunningham was an HS basketball phenom who walked away from the game, forfeiting his future. Years later, when he reluctantly accepts a coaching job at his alma mater, he may get one last shot at redemption.

Review of The Way Back by Eddie @ The Movie Guys

The Way Back is arguably the finest showcase yet for its star Ben Affleck, who after much publicized battles with alcoholism confronts his demons head on in his role as depressed and volatile one time basketball prodigy turned divorced alcoholic Jack Cunningham, who takes up a job coaching his old high school’s basketball team, in what could be a life changing opportunity.
Affleck is as raw and believable as his ever been as Cunningham, a man whose history and circumstances slowly make themselves more apparent as the run-time of the film wears on in what culminates in a fully-rounded character that we can’t help but feel empathy towards.
The Way Back might not be as solid overall as O’Connor’s previous sport centred masterpiece Warrior but much like that film and O’Connor’s well liked hockey drama Miracle, The Way Back’s in-tune dealings with moments of humanity, vulnerability and emotional dealings ensures this is top notch dramatic film-making.
As his done in past times, O’Connor manages to handle clichés of the genres his dealing with in proficient and meaningful ways and this is evident across The Way Back’s narrative as some of it falls completely in line with what you expect of a redemption story such as this but many elements are subverted also, as Cunningham’s journey is anything but a clear cut and predictable one as his mental state of mind and addiction fuel the story forward into unexpected territories.
Throughout all of this Affleck remains front and centre throughout the entirety of the film, at times some scenes are almost hard to watch when you consider the actors personal circumstances but through his first hand dealings with a potentially life threatening illness, Affleck has been able to bring a stunning realism and emotional connection to his role here, enhanced further by Brad Ingelsby’s script and one of the year’s best scores courtesy of Rob Simonsen.
Final Say –
Not the sporting film many might be expecting, The Way Back takes us into an emotionally charged study of one man’s battle’s to overcome his weaknesses that takes us to a memorable destination, that is at all times lead forward by an awards worthy performance from Ben Affleck.
See more from The Movie Guys on their website

Review of The Way Back by Christopher Pattison

Director Gavin O’Connor has made a name for himself with great sports dramas such as; ‘Warrior’ and ‘Miracle’. Warrior ranks among one of my favourite sports films of all time. In 2016, O’Connor teamed up with Ben Affleck in the surprisingly affective ‘The Accountant’ and in 2020 they have teamed up once again with ‘The Way Back’. Does ‘The Way Back’ work as another affective sports drama or does it fall by the way side? ‘The Way Back’ is an effective sports drama that transcends a lot of the clichés they we have become accustom to with this genre, presenting a compelling character study, dealing with the themes of loss, finding your way back (hence the title) and putting aside issues to help others. The story rather focuses on Ben Affleck’s ‘Jack’, who was a child high school basketball star who has never reached the heights of this since his childhood. Life has taken a turn and Jack is now an alcoholic dealing with issues of his past. This subject can be overbearing in a lot of films and if not handled properly can also come across disrespectful and cheap, however, O’Connor treats this issue with respect and care with a personal touch. With Affleck giving a personal and realistic performance of someone dealing with these issues. Because Ben Affleck has dealt with these issues in his own personal life as well, you can see that this is a really personal story that he wants to tell. You can really tell this is a personal performance and I think it may be up there with the best performances of his career. The film really does not focus heavily on other characters, this is Affleck’s movie and he really does shine here. The film takes a few twists and turns throughout that I honestly did not see coming, the ending of the film may be a letdown for some, but I found it completely satisfying and not a betrayal of the character. The film does have some of the genre tropes we have become accustom to such as; the games montage, the conflict within the team and the down on his luck team captain, but because of the care and the direction the film takes, I was fine with these tropes as they felt earned and justified because of the story that was being told. I loved ‘The Way Back’, its clever, well-written and directed and led by a near career best, if not career best, performance by Ben Affleck. I am giving ‘The Way Back’ a 8.5/10. Definitely pick this one up on Blu-Ray if you get the chance, it is worth your time.